A Clown, a Prankster, a Mensch 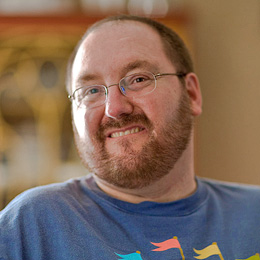 When I first met Denlow in early 2007, he was seated in a light-weight wheelchair that he would exit on occasion. The photo on the left was taken shortly after that meeting which came about because his loving wife Melissa had approached the Living/Dying Project seeking spiritual support for her husband. Over the next two years I met each week with Denlow. In March, 2009, he died after a four year struggle with Lou Gehrig’s Disease. By that time he only left his battery powered wheelchair with the help of his aide Joe and a mechanical lift that could move his large, immobile body.

Denlow was a warm-hearted, delightful “character” whose journey was so inspiring that I suggested to Dale Borglum, Executive Director of the Project, that we tell this man’s story in the annual newsletter published in the autumn of 2007. The article was well received, and we decided to include follow-up articles in each of the next two newsletters, the last reporting the circumstances of Denlow’s death.

I thought there might be interest in having the three articles that appeared over the last three newsletters collected in one location. Attached is a PDF file that essentially replicates what was presented in the newsletters, including photos, graphical images and related poems. I also add at the end a final poem from Denlow titled “Terminal Velocity.” This document also includes color photos rather than the black and white photos used in the newsletter.

For those who have yet to meet Denlow for the first time, I’m delighted for you. His spirit was undaunted by the challenges of ALS, despite the fear that visited on occasion. His warmth was legendary. I saw on many occasions how friends and family were drawn to him. His really was a graceful journey, though the loss experienced by him and ultimately by all who loved him is very real. He certainly blessed my life.