Eric: A Bump in the Road

At our first meeting Eric led me to the sun porch that ran the width of his home. Passing through French doors
I saw an expanse of glass overlooking Stinson Beach and the Pacific Ocean. Eric told me his family built the home in the 1960’s shortly after this gated community came into existence. He’d lived there since his marriage came to an end, commuting over and around Mount Tamalpais to his work as a computer specialist for a software developer. 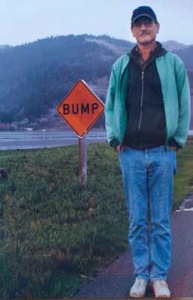 For the next nine months I met with Eric every Friday on that sun porch. Our conversations touched on many subjects, but it was the fact his illness had taken a turn for the worse and he wished to explore the possibility he was going to die, that brought us together. That didn’t stop him from getting medical treatment when warranted and some of our conversations touched on this as well. But typically, we would gaze out the window and muse about both living and dying.

Eric lived alone, which was cause of concern for both friends and family members. Yes, he had someone who brought him food a couple of times each week and some- one else who came to give him occasional massages. He even had a musician come to play for him. But for long stretches of time he was home alone.

I remember the time he told me about trying to climb a ladder I’d seen affixed to a wall in the living room. There was a sleeping loft built atop two bedroom that he and his sister used when they were young. He now slept in the main bedroom on the first floor but apparently there was something he wanted to retrieve. He slipped off the ladder and fell. He lay on the floor for three hours before one of his regular visitors arrived and helped him. This episode led to great consternation for both his mother who lived miles away in San Francisco and his sister who lived even farther away in Oregon. They insisted he get someone to live with him.

As I explored the matter with him it seemed clear Eric was content with his life. He told me he’d rather spend three hours alone on the floor than have someone else living with him. It seemed important to support him in his choice to live alone. Since this was his life, possibly coming to an end, it was essential for him to take the journey in a way that worked best for him.

After that accident our conversations became more focused on the end of life. I recall watching seagulls floating above the ocean as we took in the huge sky and the distant horizon. The openness of the vista was comforting and became the metaphor for saying farewell at the end of Eric’s journey.

As the weeks slipped by I saw how his energy was flagging, though he always made the effort to be a good host. I recall the day he tried to move my chair to a better position but was unable to do so. It was
a week later that I got the telephone call telling me Eric had died during the night. The call came early Friday morning as I was getting ready for my drive to his home. When I arrived his close friend and mother were there. I spent a few moments with them before heading to Eric’s bed. I sat with his now cold remains and said my farewell.

The family asked if I’d officiate at the memorial service they planned a few weeks later. I read a short poem I’d written that appears on the opposite page. As others shared, I discovered how unhappy folks were that I’d supported Eric in his wish to live alone. I understood, of course. They loved him and wished for him the safest journey. Yet, I knew this was the journey that Eric wanted to take, even if there were bumps on the road.

We scattered his ashes into the rolling surf and all said farewell. – Curtis Grindahl

Sitting on a Sun Porch – Standing by the Sea

I speak to you of riding those waves toward the distant horizon,
friends gathering at the seashore as you disappear from view,
words of blessing and farewell in our hearts, even as tears touch our cheeks.

We speak of life as a gift,
each meeting a celebration,
moments together treasured,
yet knowing that
the vase is already broken.
We love because it is our nature
and grieve because those we love will,
all too soon, be taken from us.
We love, we grieve, we accept the gift of life.

Thank you Eric,
for sharing the joy of so many
precious moments
until it was time for you to go.
As I promised, I’m standing at the beach waving,
My heart filled with gratitude.